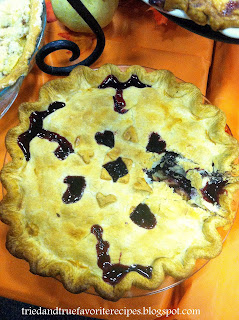 I went shopping a couple of weeks ago, and was trying to figure out a dessert for company.  As I mentally scrolled through my list of possibilities, I thought about tapioca.  My husband LOVES tapioca pudding, and he enjoys making it as well.

I dropped by the tapioca aisle, and grabbed a box.  Then started reading the back – looking for some other inspiration – you know, something guestworthy.

There on the back of the box, were a couple of pie recipes.

At home, I decided to try the blueberry pie recipe since I had some frozen blueberries in the freezer.
I even halved the sugar with splenda.  While this recipe took a little longer (maybe due to the frozen blueberries?) my husband said this was probably one of the best pies he had ever had.  He couldn’t keep out of it!

I took it to a church pie cook off, and won “the prettiest pie” award with it too – the judges apparently dug into it on the right side there.

Heat panggangan to 400*.  Pour mixture into uncooked pie crust.
Dot with butter.
Cover with an uncooked pie crust, & flute the edges.
Gently brush milk over crust.
Bake for 30 minutes.
Lower heat to 350* and cover crust edges if desired.
Bake for an additional 30 – 45 minutes – until berries are bubbling.

Remove from oven.  Allow to cool (2-3 hours) before serving.